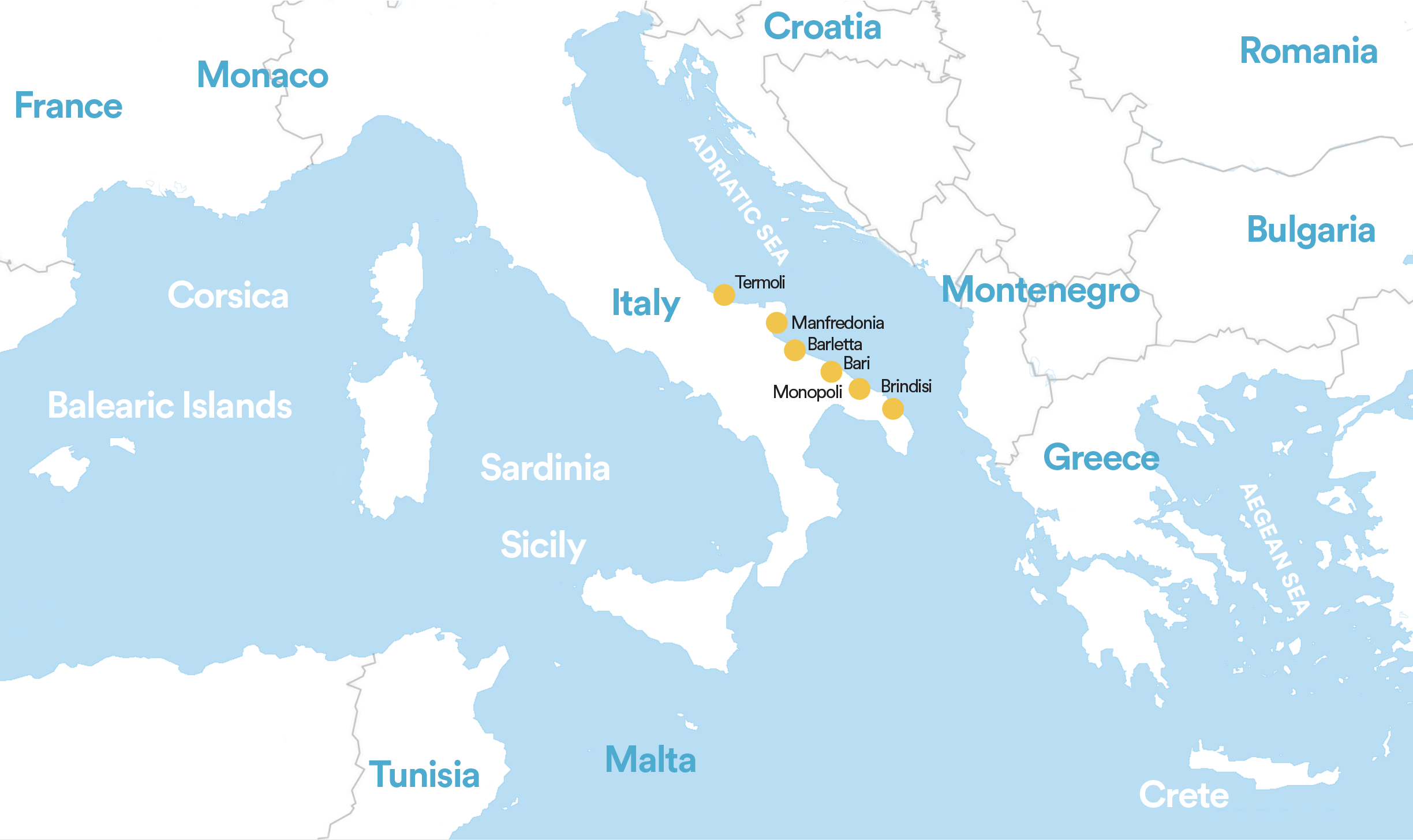 The Port network of the Southern Adriatic Sea gathers together the Ports of Bari, Brindisi, Manfredonia, Barletta, Monopoli and Termoli all along the west Adriatic coast of Italy. The ﬁve-port infrastructure includes 10 cruise quays of approximately 3.3 km of total quay length, connected to the rail and road network and served by two major international airports.

Bari and Brindisi are both turnaround ports homeports with a modern and fully equipped Cruise Terminal, close to the heart of the City. Among the two major ports, the centralised position of Monopoli’s port – a small port of call –is advantageous and oﬀers an added navigational approach with its historical area along the southern Adriatic sea port system.

Manfredonia, located on the Gargano National Park slopes, oﬀers spectacular coves and sea caves, golden beaches and crystal clear sea. Both the above mentioned main ports can accommodate cruise vessels up to 330mtr with a maximum draught of 12mtr.

Oﬀering a mild climate throughout the year in Puglia, these Southern Ports are the best hotspots in the Adriatic and Mediterranean cruise itineraries. A wide range of more than 10 cruise routes and contrasting excursion options, a great collection of gothic churches, Romanesque abbeys and Medieval castles listed on UNESCO’s World Heritage, together with the world- wide famous Trulli, Castellana Grottoes and Sassi and Rupestrian Churches of Matera (2019 European Capital of Culture) between the seashore and low olive–clad hills along 250km of coastline.

Along the Western Coast of Adriatic Sea

Onne can find 10 cruise routes and contrasting excursion options, a great collection of Gothic churces, Romanesque abbeys and Medieval castels listed on UNESCO ‘s World heritage, between the seashore and the low-clad hills along 120 km of coastline.

The seat of “costa dei trulli” shows up, with its manifold variations on theme. From Manfredonia to Monopoli, in a few kilometres, in a eye blink a phenomeneal marine show opens up, articulated by the rhythm of the ancient safaring life. You can encounter lighthouse looking like guard giants, small harbours shored up by little severe and wooden fishing boats, old towns closely perched on cliff that overhang the blue turning into thousands chromatic acrobatics.

The extraordinary old city largely consists of narrow and winding streets. Here you will find all the important medieval monuments, such as the Swabian castle and many churches, including the Cathedral of San Sabino and the Basilica of San Nicola.

This building was begun by Roger II (1139), and destroyed at least twice by the people of Bari, in protest again the tyranny of the Normans. Frederick II rebuilt it almost completely between 1233 and 1240.

The basilica was constructed between 1087 and 1197, and has always held the remains of San Nicola (who is also known as Santa Klaus). It is both a Catholic and an orthodox church, and partly for this reason is a place of annual pilgrimage for many people from all over the world. Price: Free entry.

This building was originally built in Byzantine style in 1062, and rebuilt in Romanesque form in 1170 after the destruction it had undergone at the hands of William the Evil in 1156.

Bari’s oldest festival celebrates its patron Saint Nicholas with a lurid, noisy parade on 8 May, preceded by the Processione dei Pellegrini, the procession of pilgrims to the sea. Easter is marked by a week of parades of mournful brass bands and religious icons. The Fiera del Levante is a more recent creation, designed to celebrate Bari’s trade links with the(far/near) East. Throughout the summer a wide range of music and theatre is performed, usually for free, in the Old Town.

The Enchanting “Sassi” of Matera

The city of “Sassi”, with its ancient quarters with archaic charm, an example of an urbanistic structure unique in the world, declared property of Unesco.

A World Heritage site, which has become well known for its curious whitewashed, round structures with gray, stone, cone-shaped roofs.

Remarkable karst cave system, one of the most famous show caves of Italy.

The Castle of Castel del Monte

UNESCO World Heritage-listed, this fantastic castle is considered a masterpiece of medieval architecture. 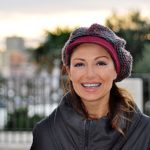 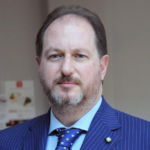