Dubrovnik – a true pearl of the Adriatic coast, is a town-monument visited over centuries by European crusaders, pilgrims to Jerusalem, travel writers, adventurers and those seeking new knowledge. Today we would like to welcome you – the modern traveller, the tourist.

A unique nexus of history, beauty and perseverance. A city to remember, one that from the very ﬁrst sight remains a part of you forever. Dubrovnik has all the ingredients for a perfect vacation – warm, sunny days for strolling the streets and lingering on cafe terraces marvelling at magniﬁcent views; good value restaurants serving excellent food and wine; and compact museums and churches for leisurely sightseeing. The streets and squares, the monuments, the city built with love and forethought, preserved with wisdom and skill, restored with care and expertise, Dubrovnik oﬀers an unforgettable experience for every visitor. Popular with passengers is a chance to walk in and around the Old Walled City and opportunity to view it from above at the spectacular panoramic spots. Tourists can visit the Franciscan Monastery with Europe’s oldest pharmacy and many other splendid buildings.

But whatever we say, our words do not give justice to this dazzling place. We cordially invite you to visit our rich cultural heritage, natural beauties, exquisite shops and to taste our Mediterranean gastronomic delicacies. So come soon and take happy memories from this ‘Pearl of the Adriatic’.

Dubrovnik’s ancient city centre, surrounded by magnificent walls, has kept the traces of the time and culture of one nation. The walls, which conceal many beauties and jewels, are themselves Dubrovnik’s greatest attraction. You will be enchanted by this unique place when you stay in Dubrovnik.

You will be enchanted by the tower that rises above the walls and has protected the city for years, the monastery and church that houses a large library with works of invaluable cultural and historical value, and the castle, palace, streets, squares and port. In 1929, the legendary George Bernard Shaw wrote “those who are looking for paradise on earth should visit Dubrovnik”. Come and see if he was right. 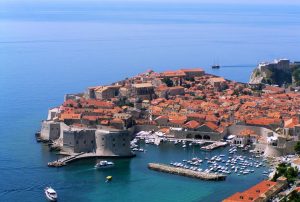 1. City walls
Dubrovnik’s most important feature and the most visually dominant symbol of the town; an impressive Middle Age construction where the corner towers of Minčeta, Revelin, Bokar and Sveti Ivan create the city’s famous historical shield.

2. Rector’s Palace
“Obliti privatorum publica curate” or “Forget your private business, concern yourself with public affairs”. This remarkable inscription can be found above the entrance of the Rector’s Palace, the most important public building in Dubrovnik and a site that was once the government headquarters and the Rector’s residence.

3. Stradun (Placa)
Dubrovnik’s main street, the city “artery”. It has two fountains designed by Onofrio at either end that were built in the 15th century.

4. Sponza Palace
The oldest multimedia building in Dubrovnik, built in 1520 in a mixed late gothic and renaissance style. It used to be a storage and customs building [Divon], and is now the State Archive where the most important documents about Dubrovnik’s history are kept.

5. Franciscan Monastery of the Friars Minor
Built in 1317under the city ramparts near Minčeta. Part of the monastery contains a very rich library that has a large number of preserved manuscripts of invaluable cultural and historical value. Asides from the ancient library, the monastery has also got one of the oldest pharmacies in Europe (1317).

6. Dominican monastery
The oldest monastery in Dubrovnik (1225) is an extremely valuable historical building, and also houses an important treasury of ancient Dubrovnik artwork, including 239 incunabula.

7. St. Blaise church
The patron saint of Dubrovnik. This majestic church is located at the intersection of two main thoroughfares, where public gatherings in Dubrovnik are held – ‘Placa’ and ‘pred dvorom’. It was built by the Venetian architect and sculptor M. Gropelli at the beginning of the 18th century.

8. Old port
Another witness of the times, once the main trading and maritime hub, today a picturesque part of Dubrovnik.

9. Dubrovnik cathedral
The Baroque cathedral was built between 1673 and 1713 and was designed by the Italian architect Buffalini on the site of the Roman cathedral that was heavily damaged in the earthquake. The people of Dubrovnik named it ‘Gospa Velika’.

10. Orlando’s column
Located in the centre of Dubrovnik. The fact that for four centuries the flag of freedom of the Republic of Dubrovnik flew on it makes it one of the most important symbols of Dubrovnik’s independence and freedom.

See Dubrovnik arrayed in all its historical splendour with this tour that takes you through the narrow streets and along the ramparts of this UNESCO World Heritage city. Walk through the city and admire the Cathedral of the Asumption of Mary a masterwork of stone whose inside is adorned with Venetian paintings. The town was given its original name Dubraca by the Slavs and it stands for Grove of the oak. You will admire the Rectors Palace, seat of the government and residence of the Prince (Rector) of the Dubrovnik republic. It was built in the late Gothic style by Onofrio de la Cava, an architect from Naples who also built the waterworks and the two public fountains in Dubrovnik. You will visit the Monastery of St. Francis whose cloister is one of the most magnificent sites in town ; the Monastery also houses the oldest pharmacy in Europe, opened in 1317. At the end of the walking tour you will have free time to enjoy, individually, the most interesting places of the old city.

THE TRADITIONS OF KONAVLE AND DUBROVNIK

Panoramic bus drive to the Konavle Valley around Dubrovnik where you can enjoy great views of the Adriatic Sea and the beauty of traditional villages. We will visit the village house of Novakovic family which houses a small regional ethnological collectionn. From here you can set off for short walks in the surrounding countryside, pet the animals or pick fruits directly from the orchard: a wonderful day of relaxation and a chance to immerse yourself in the simple pleasures of nature. Afterwards we will enjoy a live performance of local Dalmatian music and song accompanied by folk dancers in traditional Dalmatian dress. We will sample the local liqueurs and wine before enjoying smoked ham, home made bread and cheese. Return to Durbovnik where a short guided walk tour of the old town will conclude the excursion.

Enjoy your day at one of the most popular beaches of Dubrovnik offering a variety of water sport activities with café bar and restaurants. Your excursion will start with a sailing along the old town of Dubrovnik and with a 45 minutes walking along the city walls. You will have the possibility to admire the nicest corners of this Croatian town. Then, board the boat and reach for the beach of St. Jacob where you will have free time to relax in the sun or to swim. Sun umbrella, beach chairs, welcome drink and 1 additional drink included. 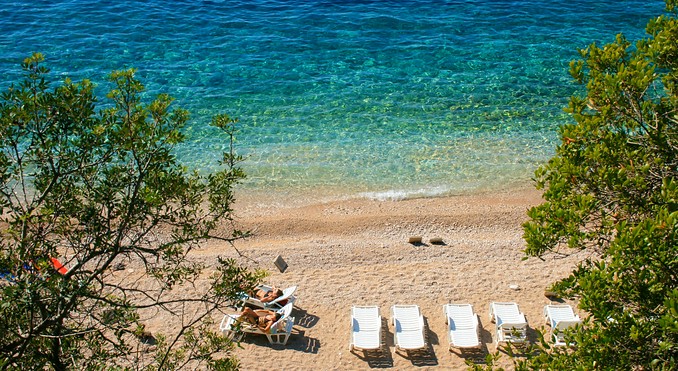 Experience the traditional spirit and genuine village atmosphere on this distinctive excursion taking you for the tourist train ride through vineyards in Konavle!

Walk through the cobbled streets accompanied by a professional guide, discovering the merits of Dubrovnik’s past and present!

THE ELAPHITE ISLANDS: Three Island Cruise and discover the secrets of the Elaphite islands! 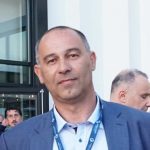