The port of ancient Neapolis, as Kavala was named at the time, was founded by the Thassians in the end of the 7th century B.C. Paul the Apostle (Acts 16, the Bible) first set foot in Europe in the city of Kavala. During Byzantine times, but also in the 16th and 17th century, the port of Kavala had the administrative and tax control of the neighbouring mining area, and served as an export node for local products (wheat, cotton, wood, etc).

The 18th century was a period of special acme for the city and its port, when among other things also the first consular authorities of France and Venice were established.

This entire journey into history is still reflected in the monuments of the city and its wider region, but is not just that. The city and its region provide a large number of destinations for shore excursions 12 months a year, covering a wide range of themes, among which:

Moreover, as the cruise port is surrounded by the city of Kavala, just a few minutes after the ship’s arrival, the passenger can wander in the shopping area and relax in the restaurants and cafes on the waterfront.

● Minutes from the port

The city and its region provide a large number of destinations for shore excursions 12 months a year, covering a wide range of themes, among which:

Moreover, as the cruise port is surrounded by the city of Kavala, just a few minutes after the ship’s arrival, the passenger can wander in the shopping area and relax in the restaurants and cafes on the waterfront.

Walk around the historical city of Kavala, the Byzantine Castle, the Medieval Aquaduct, the Imaret, the House of Mehmet Ali, and historical places in the ancient peninsula of Panagia. Located in the city of Kavala and its wider region, there are three major museums. The Archaeological Museum with ancient collections from Neapolis, Philippi, Dikli-Tas, and Amphipoli.

The Municipal Folklore Museum in a neoclassical building of the late 19th century, exhibiting traditional costumes, jewellery, handicrafts, as well as a collection of the Thasian sculptor Polygnotos Vagis (1894-1965). In the Archeological Museum of Philippi you will see excavations (still ongoing) from Philippi as well as from the prehistoric site of Dikli-tas (finds are dated as far back as 5000 B.C.).

The Philippi Festival in the ancient theatre, takes place during the summer with a large selection of plays, concerts and dance performances. The main archeological site of the area is Filippi. Filippi was founded by the King of Macedonians, Philip II, father of Alexander the Great, and is considered as the most important archaeological site of eastern Macedonia, with characteristic monuments of the Hellenistic, Roman and Early Christian periods. The most important monuments of the site are the walls and the acropolis, the Theatre (4th century BC), the Agora (Forum), the Palaestra, the prison of Apostole Paul and the three Basilicas.

St. Paul (Acts 16, the Bible) first set foot in Europe in the city of Kavala, then called Neapolis. Silas, Luke and Timothy followed him. You can visit Philippi where Paul first preached his evangelical sermon and Lydia where the first baptism in Europe took place. You can also visit the prison where Paul was held. A short drive from the centre you can visit Icosifinissa, a Byzantine Monastery built in the 4th century, with 150 cells, broad open courtyards and rare icons.

Nestos river delta extends over 500.000 acres and has been proclaimed as Wetland of International Importance by the Greek State and is protected by Ramsar Convention. It is considered as one of the most important water biotopes in Greece and Europe due to its dimension and diversity. The river runs for over 20 km and you can drive or walk along this stretch to the sea. A stunning experience of being part of the wildlife and watching Cormorant birds and Flamingos.

In the small town of Krinides, you can find the oldest natural mud baths in the world, lamatic waters and mud turf make this bath one of the best natural spas in the world. You can live a unique experience in an ancient setting. CAVES About 50 km from Kavala, you will find the Mara’s Cave at Kokinogies Drama. It is filled with stunning coloured stalactites, some of which are 2 meters in diameter with their tips touching the surface of the water. Another cave located in Alistrati Serres is the Cave of Alistrati. There are very impressive variety of stalactites and stalagmites because of the differences in shapes and age. They are limestone tubular formations growing form ceiling downwards.

Viniculture in Greece seems to be as old as Greek history. In the region of Drama you will find the Ktima Lazaridi with vineyards that exceed 110 hectares. The Ktima Bibliachora is located at the foot of the Paggaio Mountain. Every year in May the doors are open to the public to taste award winning wines of Northern Greece.

A beautiful sandy beach is the ideal destination for lovers of sun and sea. The fully equipped beach, can offer you unique moments of relaxation. The amazing beach bar is ready to accompany every moment on the beach, with juices and soft drinks for our little friends, and drinks and cocktails for those who want to give a more casual note on their summer vacations. 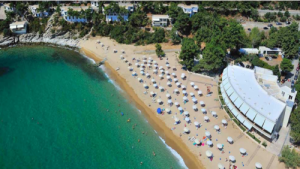 Not far from Kavala (12 km NW) you can visit the archaeological site of Philippi, an ancient Macedonian city refounded as a Roman veteran-colony. Admire the well-preserved Roman forum and the Early Christian basilicas. Still visible are also the remains of the Acropolis, the palaestra, the baths and the majestic octagonal church. The archaeological site of ancient Philippi is where Apostle Paul first preached Christianity. You will visit the main site to see the ruins of the glorious ancient city, the two Basilicas, the Forum, the Byzantine Headquarters, the so –called jail of Apostle Paul, the theatre of the classical period. 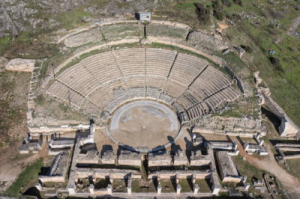 Nestos is a river rises in the Rila Mountains of Bulgaria and flows into the Aegean Sea near the island of Thasos. At the end, the main stream spreads over the coastal plain of Chrysoupolis and expands as a deltaic system with freshwater lakes and ponds forming the Nestos delta. 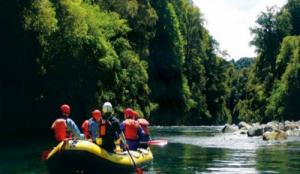 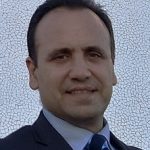