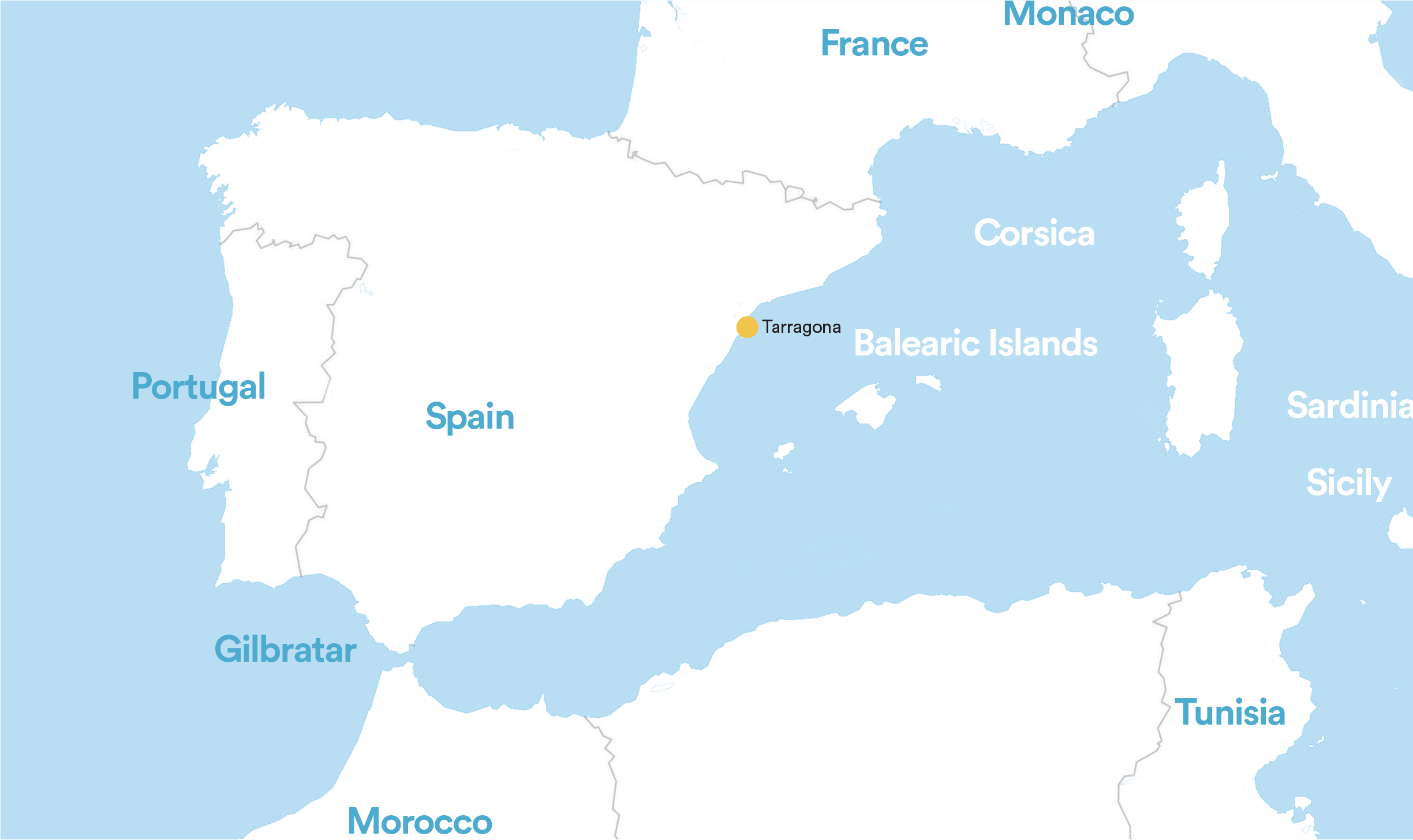 Tarragona Cruise Port Costa Daurada has set itself up in the world of cruises as a Mediterranean destination. The region of Catalonia known as the Costa Daurada, and its capital, Tarragona, located about 100 km south of Barcelona, will undoubtedly prove to be one of the cruise destinations to watch closely in coming years.

Tarragona enjoys the international recognition of Universal Exceptional Value Site by UNESCO, in which is included the collection of archaeological remains of the old Roman Tarraco; and the medieval Monastery of Poblet as World Heritage Site.

Also, the Human Towers; one of the most genuine and original cultural manifestations in Europe, which is designated Intangible Cultural Heritage by UNESCO.

Tarragona Cruise Port is also synonymous of Gaudí. In Reus, Gaudí’s native city, we still can see the places this genius frequented, and which are related to his life.

It’s worth highlighting the extensive range of wine producers in the area, with 5 denominations of origin of wine, including one as eminent as the Priorat.

Furthermore, this destination has a full cultural and leisure oﬀer, not forgetting that it can oﬀer 7 golf courses which make Tarragona Cruise Port an excellent choice for golf lovers. One of the other big attractions is PortAventura World, Europe’s second largest destination resort. In 2017 they launched Ferrari Land, a new theme park which will oﬀer all its visitors emotion, impact and unbeatable adventure, plus a new Kid’s Area with 5 brand new attractions in 2018.

Tarragona oﬀers numerous cultural and natural attractions, which translate into an excellent variety of possible excursions around the port, allowing visitors to experience the city through its history, its traditional culture, the essence of its cuisine and its local businesses.

Well connected with Europe and the rest of Spain, it has two international airports, one in Reus, only 10 minutes away, and the other in Barcelona, to which it connects directly through motorway AP2 in only 55 minutes.
Destination
Information

Tarragona is located to the south of Barcelona on the Costa Daurada, a tourist destination specialising in family tourism with an extensive range of cultural, outdoor, wine and food, and leisure activities that offer visitors everything they could hope to find during their holidays.

The beauty and quality of its golden sandy beaches, its pristine landscapes, its mild weather, the kindness of its inhabitants, its abundant shopping opportunities and excellent dining make Tarragona one of the most exceptional destinations on the Mediterranean coast.

Tarragona, which evolved out of the ancient Roman Imperial Tarraco, is a lively city where culture and history are clear to see in each and every one of its charming streets. Its impressive archaeological legacy from the Roman era, declared a World Heritage Site by UNESCO, along with its mediaeval past and its modernist works offer visitors the opportunity to enjoy a fascinating adventure back through time.

Tarragona offers numerous cultural and natural attractions, which translate into an excellent variety of possible excursions around the port, allowing visitors to experience the city through its history, its traditional culture, the essence of its cuisine and its local businesses.

And from the Port of Tarragona, visitors can be in Barcelona in less than an hour – a wonderful opportunity for a day trip to one of the most popular and exuberant tourist destinations in the world.

The Roman route introduces visitors to the history of Tarragona through excursions to the city’s main surviving monuments from the ancient Roman era, when the city was at the peak of its splendour. In November 2000, the city succeeded in having the ancient Roman archaeological complex of Tarraco declared a World Heritage Site by UNESCO.

The city of Tarragona features several major monuments dating from its mediaeval past. Its abundant Roman ruins are therefore supplemented by a rich mediaeval artistic heritage best epitomised by the city’s cathedral, which offers outstanding examples of art and architecture from the Middle Ages. This route was designed to acquaint visitors with this part of the city’s past, weaving a single tour from the area’s many mediaeval monuments and sites of interest.

The area is home to a wealth of Catalan Modernist architecture, the unique form of Art Nouveau that took on its own personality in this part of the world at the end of the 19th century. Drawing their inspiration from nature, Catalan Modernist architects breathed life into new concepts based on colour, curves and fantastical creatures and the area abounds with examples of their genius. Reus is also home to the Gaudí Centre Reus, a fascinating museum featuring interactive exhibits about the brilliant Reus native and undeniably one of the most highly respected architects of all time.

Tarragona and its surroundings are home to numerous sites of religious and historic interest. From its magnificent cathedral and cloister in the heart of the historic quarter to the beautiful art of the chapels and churches in every neighbourhood from throughout the ages, visitors interested in religious sightseeing will have plenty to do here.
The Cistercian route is located inland from the Costa Daurada and links three monasteries belonging to the Cistercian Order dating back to the 12th century. The Monastery of Poblet, declared World Heritage by UNESCO, still retains all its monastic activity as religious life is still present.

Tarragona’s wine regions first started to stand out for their excellence as far back as the 12th century. Tarragona’s winemakers have overcome numerous difficulties over the centuries to produce their exquisite wine, which has garnered international renown and respect for its high quality. With six designations of origin wine and a large part of its territory covered under the designation of origin cava, the Costa Daurada has a remarkable variety of vineyard landscapes where you can visit wineries, walk among the vineyards and attend festivals, wine tasting or wine pairing lunches.

Frequent sunny weather and an average yearly temperature of 18 ºC make Tarragona an exceptional location for practise golf. It allows golfers to practice the sport all year round, either in the seven golf courses there or both Pitch & Putt.

PortAventura is one of the largest theme parks in Europe and a place for visitors to discover all kinds of fun. Each of the six areas of the park is a separate new and wonderful world with magnificent shows and breathtaking magical rides for all ages. From the tallest and fastest roller coasters in Europe to smaller rides that parents and children can enjoy together.

Costa Caribe Aquatic Park is an amazins water park with over 50.000 m2 of refreshing fun, an authentic Carribbean pirate island that will delight guests of all ages with its 16 exciting rides and slides.
For summer 2014 Cirque du Soleil visits PortAventura to present Kooza, one of the most impressive productions of the Canadian troupe.

In 2016 Ferrari lovers will have a new theme park at PortAventura, Ferrari Land. Brand enthusiasts of all ages will enjoy many attractions and a new and magical diversion, the highlight of Ferrari Land: the highest and fastest vertical accelerator in Europe. PortAventura will be home to the world’s first Ferrari-themed hotel.

The party is the true living heritage of the Costa Daurada and throughout the year you can find samples of celebrations of magical origin, religious or peasant invited to participate. You can enjoy, such as towers, parades, concerts, theater, food tastings, pilgrimages, fireworks and much more. Special mention should also be made of a spectacular tradition, the construction of human towers, known as castells. Because this is such a spectacular and completely unique tradition, in 2010 UNESCO declared it to be Intangible Cultural Heritage of Humanity.

The City walls
The Cathedral
The Cloister
The Chapel of St. Paul
The Church of Our Lady of the Miracle

Just a short trip inland from the city of Tarragona guided tours can be arranged to allow visitors to taste the acclaimed wines of the renowned regions of Priorat, Montsant, Terra Alta and Tarragona at picturesque wineries located in a unique natural environment, surrounded by vineyards and olive trees.

PortAventura is one of the most symbolic themes parks in Europe, the six areas will let discover new and wonderful worlds with magnificent shows and breathtaking magical rides for all ages.

A world-renowned city and the capital of Catalonia, Barcelona is packed with things to see and do. From learning about its fascinating history through a tour of its monuments, to doing a little shopping along the glamorous Paseo de Gracia, to strolling through some of its most distinctive neighbourhoods and trying amazing cuisine, Barcelona has something for everyone.

Tarragona is planning an additional pier to expand its infrastructure and to continue to ensure excellence in its cruise operations: