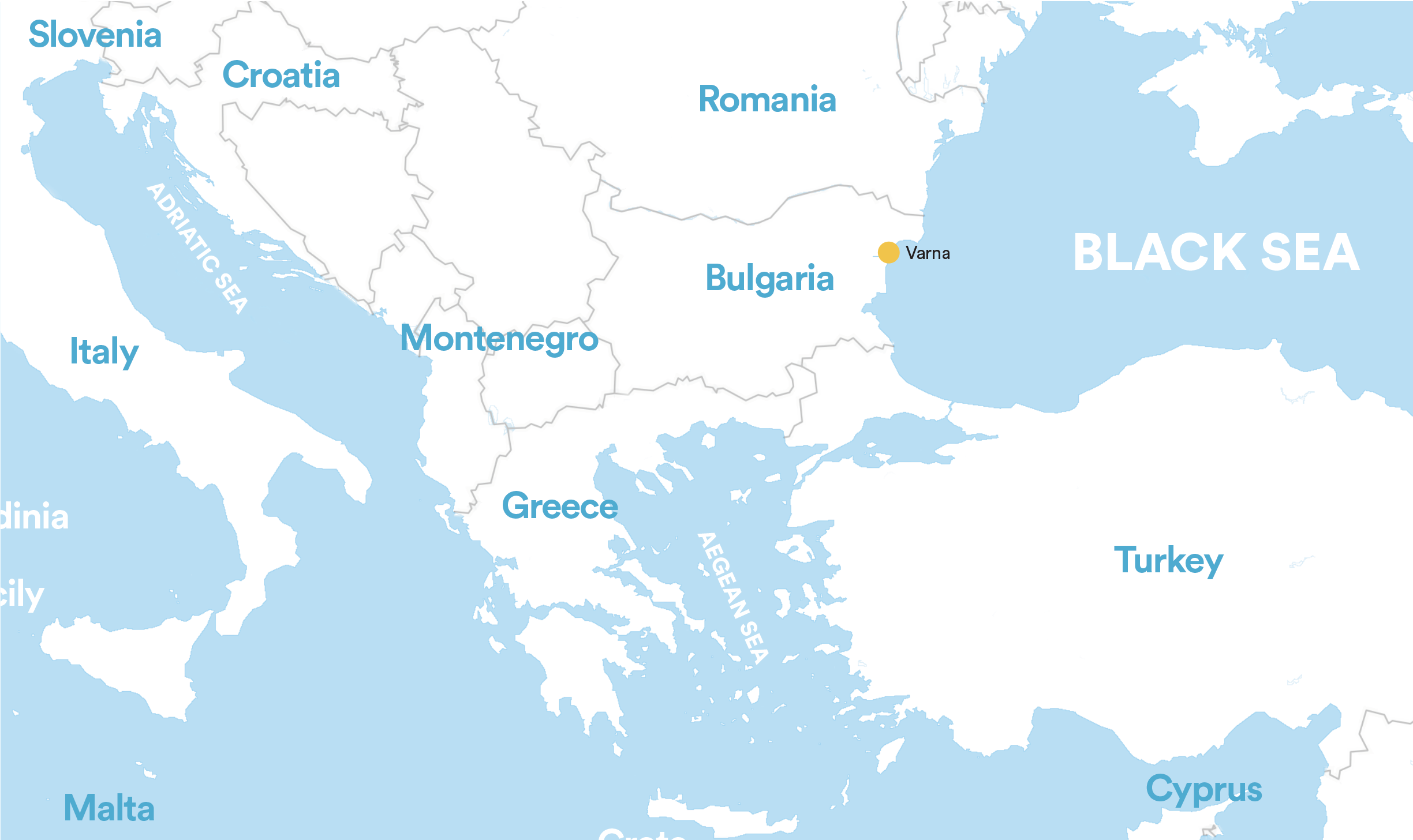 This year marks 115 years since the inauguration of the modern Port of Varna. Port of Varna EAD is a state-owned port operator of Varna East (Passenger Terminal) and Varna West port terminals. Both terminals are universal and are leaders in the handling of containers and grain. The charm of Varna stems from 7 ancient and modern cultures. The oldest golden treasure in human history was produced in Varna 4000 years BC. To see it in the Museum of Archeology or to visit other important sights of the city, a small walk starting from the Passenger Terminal, past the beautiful statue of “Dragons in Love” is enough.
Once in the pedestrian center of the city, you can choose whether to visit the cathedral with the golden domes, or to visit the Roman Thermae – the largest public ancient building ever discovered in Bulgaria, or another museum. Or from the very start you can walk along the promenade or enter the deep shadows of the “Sea Garden” all the way to its northern end, where in the Dolphinarium you can watch a show, swim with the dolphins or get a kiss from a seal.
You can enjoy the summer cultural events, and if you happen to meet the dawn on July 1, come to the breakwater to attend the traditional for Bulgaria hippie holiday “July Morning”. Varna is a starting point for four UNESCO sites, which will offer you close contact with antiquity, the Middle Ages, even some of the secrets of the Renaissance. And you will find the secrets of the heart in the queen’s Palace in Balchik.
Read More
On 18th May 1906, in the presence of Prince Ferdinand, ministers and foreign delegations, a ceremony took place for inauguration of Port of Varna – today’s Varna East port terminal. That was the beginning of modern development of Port of Varna, which now includes seven terminals. Port of Varna has faced various historical periods and challenges, and now it guarantees  high-quality service, transparency and fair relationships with its suppliers, clients and employees.

The trading company Port Varna EAD is a port operator which is 100% state-owned, and it operates the largest port terminals Varna East and Varna West. Located at the EU outer border, these terminals are key elements of the Black Sea transport network, providing convenient bridge for cargo traffic between Europe, Asia, Near and Far East. Port Varna EAD provides port services and any related agency, commercial and technical service, forwarding, investment and engineering, research and development, training of port staff, home and foreign trade.

The terminals can handle all types of cargo, including containers, general cargo, dry and liquid bulks. The port successfully handles heavy lifts and out-of-gauge traffic, including components of wind turbine generators, power transformers and project cargo. Among the priorities of the company is the preservation of environment by introducing new facilities and technologies. The Passenger Terminal is located at the north-east end of Varna East,  where it serves passenger and cruise ships, scientific vessels and pleasure boats.

Varna is one of the most visited cities in Europe by tourists who travel for pleasure and holidaymakers. Varna is the third largest city in Bulgaria (with population more than 347,840 people), with an area of 205 sq. km. Its situation on the Northern shore of the Black Sea, along with its richness in natural resources make it one of the famous resorts  in Europe and definitely the largest one in the Black Sea region. It also happens to be on the crossroads between Western Europe and the Middle East.

The town was established on the ruins of an earlier Thracian settlement as a flourishing trading colony in 570 B.C. under the name of Odessos (town on water) by Greek sea-faring colonizers from the town of Milet in Asia Minor. In the year 15 A.D. as part of the province of Moesia the town was annexed to the Roman Empire. 2nd and 3rd century– the town’s best years. The Romans fortified the city, built a water-supply system as well as many temples and public buildings (the Big and Small Thermal Baths). After the disintegration of the Roman Empire in 395 A.D., the town became an important port of the Eastern Roman Empire (Byzantium) and was converted to Christianity. The town was destroyed several times: by the Huns (in the 5th A.D.), by the Avars and Slavs (in 6th A.D).

The Slavs named the town Varna. For the first time the town was so mentioned when the proto-Bulgarian horsemen of Khan Asparuh founded the First Bulgarian Kingdom in 681. During the 13th and 14th century Varna turned into a thriving commercial port city frequented by Genoese and later also by Venetian and Ragusan merchant ships. In 1393 Varna was captured by the Ottoman troops. On November 10th 1444 took place the Battle of Varna, when a crusade for the liberation of the Christians on the Balkan Peninsula led by Ladislaus III Jagello and his Hungarian general Janos Hunyadi (20 000 crusaders) was overpowered by the strong army of Sultan Murad II (60 000 soldiers).

The Russians temporarily conquered the city in 1773 and again in 1828. In 1866 the first railroad in Bulgarian lands connected Varna with the port of Rousse on the Danube, thus linking the Istanbul, the capital of the Ottoman empire with Central Europe. The town was finally liberated on July 27th 1878 after the Russo-Turkish war of 1877-1878 and it grew rapidly. In October 1972 near Varna were found a Chalcolitic (Eneolithic) Necropolis from the 5th – 4th millennium B.C. with 294 graves. The gold objects only are more than 3 000 and weigh in total well over 6 kg. Its purity is 23,5 carat and it is considered to be THE OLDEST GOLD TREASURE IN THE WORLD or hundreds of years older than anything comparable elsewhere.

Varna the cradle of the oldest European civilization. In the city you could see the original artifacts of the oldest gold treasure in the whole world (4600 – 4200 B.C.). And that is just for the start of your history tour – there are many other treasures from later periods and cultures, such as Thracian, Greek, Roman, Byzantine, Bulgarian… The guests of the city of Varna are deeply impressed and fascinated with the absolutely rich collections of the many museums of Varna, moreover, the fourth biggest Roman Thermal Baths of Europe are among those museums.

Varna is a cosmopolitan city, so you can constantly find artistic and cultural exhibitions throughout the city. There are many art galleries and museums. Varna boasts with countless cultural events, involving folklore, music, ballet, opera and theater, movies and animated pictures presentations, exhibitions in the open air and plenty of art galleries. Varna is also a candidate for European Capital of Culture in 2019.

Varna has a great location and mild climate throughout the year. The coldest time during the year is usually from December to March, when the average temperature is between 5 and 10°C. The summer begins in early May and lasts till early October. Temperatures in summer usually vary between 25 C and 35 degrees C. The hottest months are usually July and August, with temperature around 30 – 35°C, so it’s the perfect climate to go to the beach and enjoy the sun. Seawater temperature during the summer months is usually around 23–27 degrees C.

Region of Varna (including Golden Sands and St. St. Constantine and Helena Resorts) is well-known for its pure and fine sands and hot mineral springs.

Bulgarian cuisine is exceptionally diverse and delicious, consisting of various salads, breadstuffs, stews, and other local dishes. Many of the dishes are prepared according to traditional recipes handed down from generation to generation over the centuries. In Varna there are many traditional Bulgarian restaurants, wineries where you can taste the famous dishes of different type.

Bulgarians are very hospitable people. In most places you will be welcomed in the traditional way with delicious local meals and wine. The people like to celebrate and you can observe local festivals. Young Bulgarians speak English and other foreign languages.

By 1878, Varna was an Ottoman city of mostly wooden houses in a style characteristic of the Black Sea coast, densely packed along narrow, winding lanes. The town was surrounded by a stone wall restored in the 1830s with a citadel, a moat, ornamented iron gates flanked by towers, and a vaulted stone bridge across Varna River.  The place abounded in pre-Ottoman relics, ancient ruins were widely used as stone quarries. Today, very little of this legacy remains; the city centre was rebuilt by the nascent Bulgarian middle class in late 19th and early 20th centuries in Western style with local interpretations of Neo-Renaissance, Neo-Baroque, Neoclassicism, Art Nouveau and Art Deco (many of those buildings, whose ownership was restored after 1989, underwent renovations).

Varna has an impressive nightlife and many say that the city never sleeps. It’s almost impossible to find closed bars or clubs during the night in the summer. Many of the bars and restaurants in the summer months are located directly on the beach, near the Seaside Garden.

Varna is popular for its creative and innovative fashion and you can find here plenty of modern shopping centers, traditional open-air markets and small shops.

Last but not least, the prices in this country are very reasonable – good value for money. These are the top 10 reasons to visit Varna, but for sure you will find more reasons to come to Varna a city of unique charm with wide range of leisure activities to enjoy. 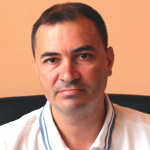