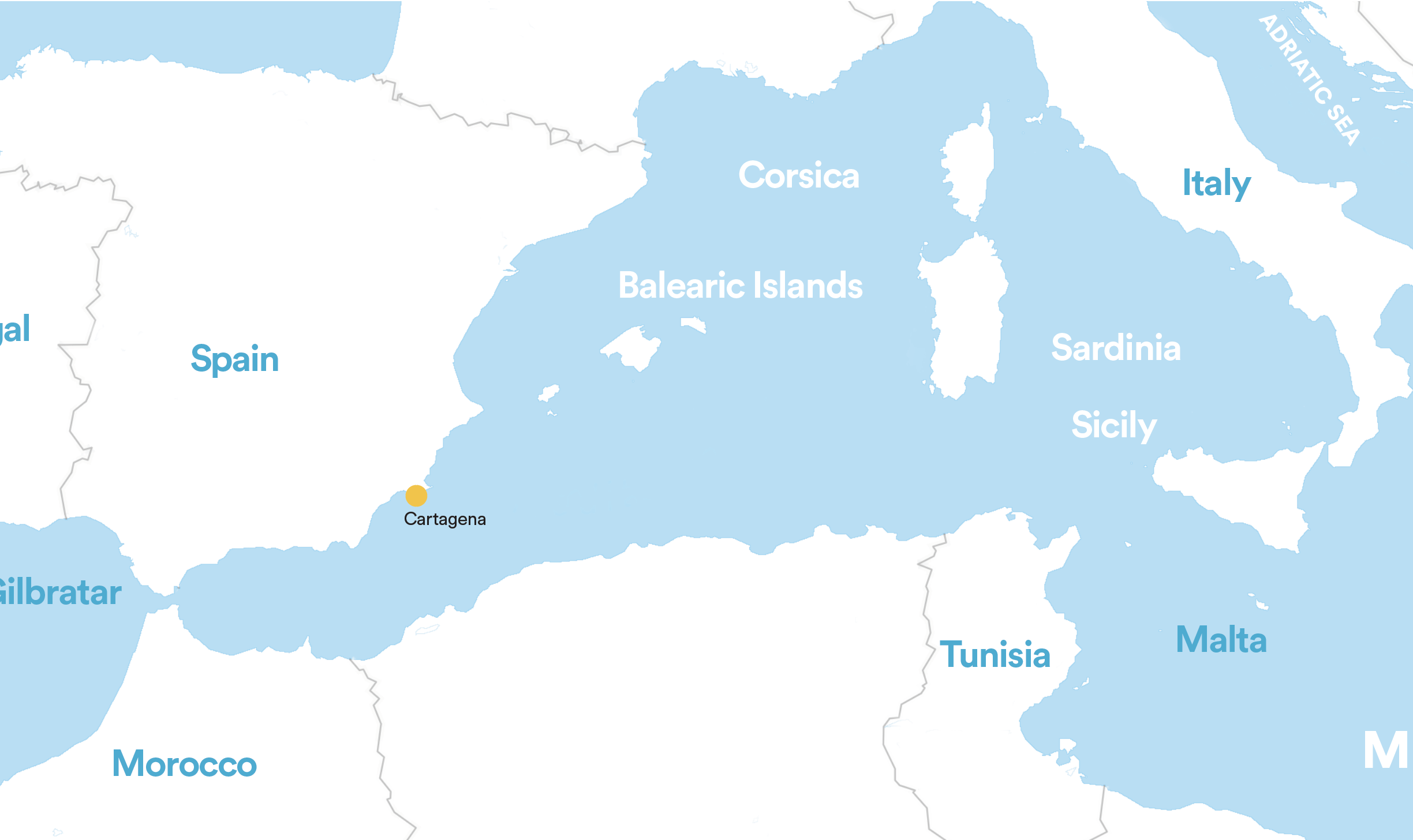 The Port of Cartagena is a compulsory reference for cruise vessels owed to its strategic position within the Mediterranean, in the southeastern coast of the country.

Since the inauguration of the Cruise Berth in 2001, with a 344 meter long quay, the terminal was undergone various changes, given the growth that the port has experienced in the last 20 years, as well as the larger size of the vessels.

In 2010 an expansion of the quay took place, providing it with 560 meters, 12m depth in an area of 4,500sqm. Development works also took place featuring rest and shade areas, Port Police and Civil Guard centers, information office and parking area for buses. The area of the terminal was increased by filling out a water area. In order to handle a greater number of shore excursions from different ships, the access to the Terminal was also improved, both for buses and passengers.

In the summer of 2016, partial embarkments took place onboard the Royal Princess, for which purpose, the Port Authority built a small terminal building with the necessary services: check-in desk, security scanner for passengers and baggage, passport control, offices for the Police, Civil Guard, Customs and Port Police as well as toilets.

The most recent enlargement took place in 2017, with a new enlargement providing the Terminal with a 709 meter long quay. These last works enable two 300 meter ships to berth in Cartagena simultaneously.

● Minutes from the port

Cartagena, with more than 3,000 years of history, is the second oldest city in Spain. The historical center is located 500 meters from the Cruise Terminal, and offers a variety of tourist attractions, shops and restaurants. There are three important periods in the history of Cartagena: roman, military and modernist, all of which are visible throughout the city in different monuments. Among some of the most exceptional sights are the Roman Theatre of Cartagena and its museum, which remain the number one attraction, the Roman Forum District, as well as visits to Spain’s National Museum of Underwater Archaeology, the medieval castle of La Concepcion and much more. A 10-minute walk will take passengers to the city center where they will encounter a great number of modernist, eclectic and baroque buildings. The Region of Murcia offers other places of interest that range from a variety of products: sea, sun and beach, culture and city, health, nature, religion, etc. Thanks to the Mediterranean climate, you can practice a great number of sports all year round.

Roman Theatre and its Museum

Inaugurated in 2008, the Roman Theatre of Cartagena which dates from the late 1st century BC was discovered quite by chance over twenty five years ago now. It had a 6,000 spectator capacity, which consisted not only of stage and seating, but also included gardens, cloisters and leisure areas. Through a series of drawings, audio-visual aids and archaeological objects the history of the town and theatre is presented. The last great hall of the museum is the open air theatre itself completely restored and approached via a corridor which runs underneath Santa Maria la Vieja Church.

The new National Museum of Underwater Archaeology (ARQUA), a building of avant-garde architecture, was inaugurated in spring of 2008. It is made up of two buildings, with a square in between the two, from which the visitor may access the interior through a ramp. The architectural shape is based on the underwater concept, with the aim of entering the depths and accessing the submerged heritage object of the exhibition. It covers about 6,000 square meters with about 35 percent of the space dedicated to exhibitions.

The Interpretation Centre of the History of Cartagena is located on Concepción Hill, one of the five hills that protect the city. The Centre is built in the remains of the castle whose name it bears, although it is more popularly known as the Castle of the Ducks, as there is a small pond where ducks used to live. The Castle is the best point to know the city and get a general vision of its 3,000 years of history.

The Interpretation Centre of the Punic Wall recovers the remains of the ancient Carthaginian wall that surrounded the city in the 3rd century BC, making it one of the scarce Punic findings located in the Iberian Peninsula. The remains discovered are a 30 metres long wall, and in some parts blocks of about 3 metres high are conserved. The visit to the wall enables you to see a funeral crypt belonging to the hermitage of Saint Joseph, built during the XVI and XVII centuries. Inside you may find paintings of the death dance which formed the pictorial programme of the crypt.

Navidad Fort, built in the 19th century and located next to the Navidad Lighthouse holds an interpretation centre of the defensive architectural ensemble of Cartagena. The city is hoping to be named “World Heritage City” for its value, both historic and archaeological. Cartagena is also a major Naval Base of the Spanish Navy.

The forum is an archaeological site from the 1st century, made up of natural hot springs. The thermal baths include a series of cold, warm and hot rooms and an atrium building, which is believed to have been used for banqueting. Among the remains found, the fresco cycle that decorated the banqueting halls and the floor of the opus spicatum (spiked work paving), are both in a very good state of conservation.

Includes 14.5t of gold and silver coins, which was recovered in December 2012 by US deepsea salvage company Odyssey and taken to the National Museum of Underwater Archaeology, where it will be displayed to the public.

Created in 1394 on the site of a former mosque, the Cathedral is a 600 year old construction. Although it has many Renaissance and Baroque elements, the interior is mainly Gothic. The façade is Baroque and was designed by Jaime Bort. It has a 95-metre tower that took more than two hundred years to build with the involvement of many different architects, of whom Ventura Rodríguez specially stands out. Los Vélez Chapel is Flamboyant Gothic and has a vaulted ceiling with star-shaped skylights, while Los Junterones Chapel is in Renaissance style.

In la Unión, a small town 20 km from Cartagena, we find the Mine Agrupa Vicenta one of the largest visitor mines in Europe covering more than 2,000 square meters and open to the public to a depth of 80mtr, show how they worked. A train takes visitors to the mine entrance.

The region owns three wines with denomination of origin from the towns of Bullas, Jumilla and Yecla. Tourists have the opportunity to visit the vineyards where these wines are made.

Defensive and architectural ensemble of Cartagena

The cultural offer found in Cartagena is very broad thanks to the different civilizations that have settled in Cartagena. Not to miss are the Roman Theatre and its Museum, ARQUA Museum, Concepción Castle, Punic Wall, Navidad Fort, Roman Forum quarter and many others.

Murcia
The city of Murcia, founded in 831, is considered a modern, academic, cultural, leisure-based and congress city, with a wide range of shopping centers, boutiques, restaurants and cafes. Among the broad and varied cultural offer, it is worth visiting the Cathedral, the Casino, the Almudi Palace, the Episcopal Palace, the Fine Arts and Salzillo Museum and many others.

Caravaca de la Cruz
Caravaca is the main town located in the northwest region of Murcia. It is an ancient city with numerous archaeological remains. In 1998 it was declared a Holy city, making it one of five in the world that along with Santiago de Compostela, Santo Toribio de Liébana, Rome and Jerusalem are able to celebrate the Permanent Jubille. The Santísima and Vera Cruz Sanctuary, built on a hill dominating the town, is divided into two parts: the walled area, made up of 14 towers, and the sanctuary.

Lorca
Lorca is known as the Baroque City. Take a visit back to the middle Ages through the door that the Lorca Workshop of Time opens up. Tour characters from the past, such as a stonemason or the alchemist guide visitors through the exhibition reliving medieval times.

La Unión is a small town 20 km from Cartagena, where over 2,000 years ago the Romans started mining silver. At the beginning of the 20th century new deposits of iron ore, lead and zinc were found and the town started its mining activities again with entire families including children working underground. In the mid-1950s the mines were abandoned and today 2,000 disused mines exist in the area. Agrupa Vicenta, one of the largest visitor mines in Europe covering more than 2,000 square meters and open to the public to a depth of 80mtr, show how they worked. A train takes visitors to the mine entrance.

La Manga del Mar Menoris a unique setting with a privileged climate enabling you to enjoy 320 days of sunshine a year. It has 170 square kilometres of surface area and its 73 kilometres coast, considering it the largest lagoon in Europe. The Mar Menor offers tourist the opportunity to choose from a varied number of beaches and water sports such as diving in Cabo de Palos (Palos Cope), riding on water scooters or sailing boats at either one of the two seas, fishing and for peace and quiet lovers, sea-water health spas.

Visit the most popular bars and restaurants in Cartagena, where you will taste some of the typical dishes of the area accompanied with a wine also from Murcia. 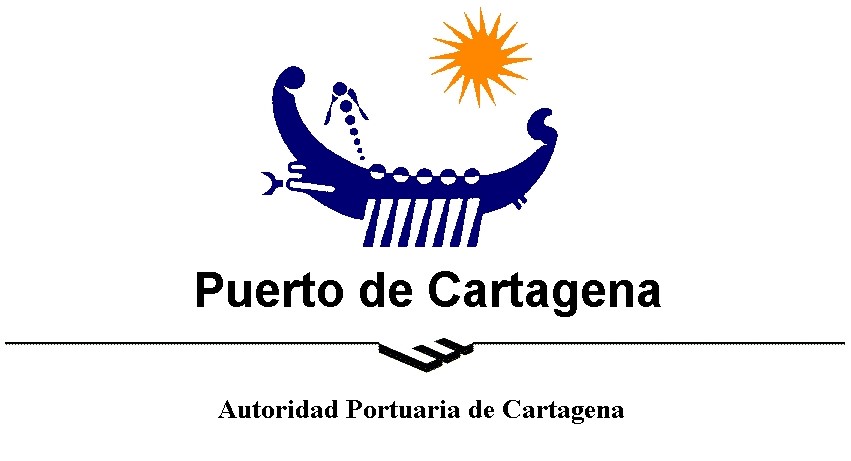 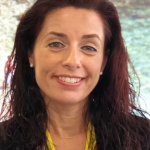